How is the relationship between atheist China and the Pope the Vatican improving?

By Robert Nelson on September 23, 2020
America (United States of America) is angry again. China is again the reason for heartburn. This time the reason is related to religion. China-Vetican Relations were frozen, but now the ice is melting. Even now ‘experimental’, but the Pope (Pope Francis) has approved to pursue the agreement. According to the Vetican-China Agreemnet, China will now accept the power of the pope and in return the pope will recognize the Chinese bishops. China’s Foreign Ministry indicated that its relations with the Vatican are improving. how? What’s the deal? And why is America angry?

Why is America unhappy with this deal?
Pope Francis has been constantly trying to improve the Vatican’s relationship with China so that about 1.2 Christians living in China can benefit. But the latest efforts have shocked America because US President Donald Trump has been targeting the issue of non-religious freedom in China in his campaigning in view of the upcoming elections.

read this also :- Horseshoe Crab will be very important in corona vaccine development, why and how?Trump’s secretary Mike Pompeo, while writing an article in America’s religious magazine First Things, had severely criticized China for its “terrible behavior” with followers of all religions. In this article, questions were raised on moral grounds regarding the deal between Vatican and China.

What is this provisional deal?
After much debate between China and the Vatican, a temporary agreement was reached on 22 September 2018, but even after this the agreement could not gain momentum. A report by Al Jazeera says that this is such a secret deal that the actual details about it are not known, so it has become mysterious. But its main point is that both China and the Vatican will interfere in the appointment of Catholic bishops in China.

Why this Sino-Vatican deal happened?
About 125 million Catholic Christians were divided in China for the last several decades. Some included organizations run under government machinery, including the Atheist Communist Party electing priests and some remaining unauthorized undergrowth and connected to the Vatican Church while remaining loyal to the Vatican. These Christians also had to face persecution in China because they kept accepting the power of the Pope.

On the other hand, there were reports recently that China is facing shortage of bishops. About one-third of the 98 Dharmakshetras have no bishop. Those who are, have become old and are close to retirement.

What is the religious situation in China?
China is declared an atheist country under the Communist Party’s power, but there are followers of many sects. There have been many surveys about this, the most authentic of which is considered the 2014 survey of CFPS. According to this, 15.87% people in China are Buddhists, 5.94% other religions, 0.85% Taoists, 2.53% Christians (2.19% Protestants and 0.34% Catholics) and 0.45% Muslims.

In addition, a 2010 survey by the Pew Research Center found 21.9% of the Chinese population believed in regional religions, 18.2% Buddhists, 5.1% Christians, and 1.8% Islam. Similarly, Phil Zuckerman’s survey stated that as of 1993, 59% of the Chinese population was not religious. Whereas in the year 2005 only 8% to 14% left atheists. Even after all these surveys, China has been accused of religious repression from time to time.

What results from this deal?
Immediately following this deal towards reforming relations, Pope Francis recognized 8 Chinese bishops who were appointed by the Communist Party without the approval of the Vatican. On the other hand, 2 new bishops were also appointed in China after the consent of the Pope, the leading religious leader of around 1.3 billion Christians of the world. This was also the first time in the last 70 years that the Chinese and Vatican foreign ministers met in public. 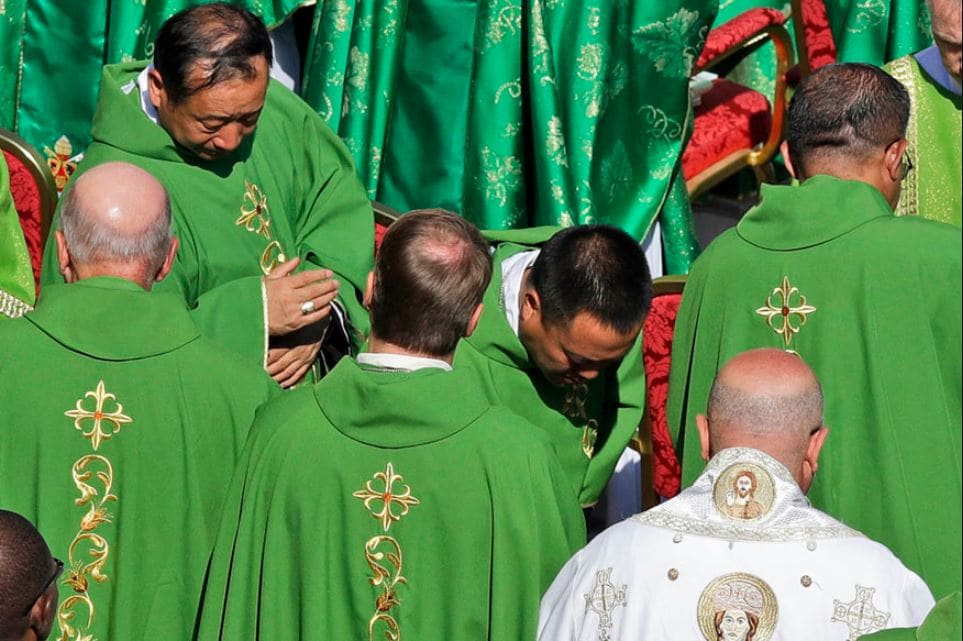 This picture was published when Pope Francis welcomed Chinese bishops.

How many improved relationships?
How did this deal make China and the Vatican better or worse, under the accusations of the Chinese government adopting a stern attitude towards being an atheist and repressing the other religions? In this regard, Father Bernardo Cervlera, an expert of the Catholic Church, told a religious news agency this month that the deal is showing only a slight difference.

Egg better or milk? Why this debate started with the move of MP government?

What is the American Space Force, first deployed in the Middle East

Bernardo also hoped that the Vatican would adopt a slightly more aggressive attitude in reaching an agreement with China and try to get its say. The reason for this is that recently, reports said that Pope Francis gave recognition to the clergy appointed by China, despite the fear that China could use it in action by identifying unrelated devotees from the official church. On the other hand, those close to the Pope have also admitted that so far no major result has come out of the deal.

It is very important that Taiwan has diplomatic relations with only the Vatican throughout Europe because many countries consider Taiwan to be part of China rather than considering Taiwan as an independent power, only because of Chinese pressure. However, after this deal, according to Petro Parolin, who is called the right hand of Pope Francis on one side, the main purpose of the Catholic Church is to restore the Church in China as much as possible.